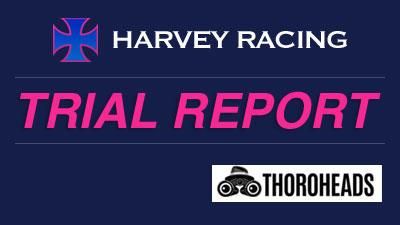 Heat 13 (1000m, 7 runners, Shaun McGruddy)
Jumped okay but was eased back behind heels looking for a trail, settling 6th (rail) in a fast run heat. Lost touch a little with the main bunch but began to pick up some ground on the bend, turning for home 6th (rail). Was under hard riding shortly after straightening and responded fairly, doing her best work on the line to finish 6th beaten 4.0L.

Bremer Babe made up some nice ground in the straight after being a fair way from the leader on the turn, and it probably was her best 1000m trial perfformance yet.

The trial was satifactory and she is ready to head to the races now. We will find something suitable for her in the coming weeks. – Todd Harvey

Heat 14 (1000m, 9 runners, Troy Turner)
Jumped well from an inside barrier and shared the lead early before easing to settle 3rd (2wide) behind a tearaway leader. Held that position in transit and was being asked for an effort when 3rd (2wide) turning for home (over 8.0L from the leader). Was shook up at the 200m and responded fairly before being eased down late to finish 4th beaten 7.5L.

Pago Minx became very stirred up prior to his heat and burned a lot of nervous energy. He had effectively run his trial before the gates had even opened.

Did a fairly good job to compete as well as he did but he still has a lot to learn. We are planning on trialling him again in the coming weeks. – Todd Harvey