TRADESMAN GETS THE JOB DONE ON DEBUT 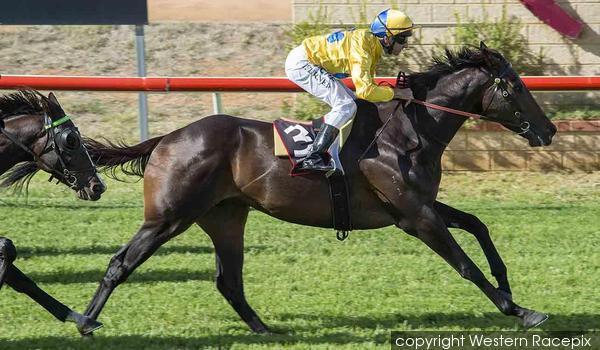 Huge Trade Fair gelding Tradesman made a winning debut at Northam on Sunday the 3rd of May.

Brought by Todd Harvey at the Perth Magic Millions yearling sale, Tradesman has been a slow maturing horse going shin sore three times in previous preparations "Tradesman's owners have been very patient and it was fantastic to reward them with a first up victory'' said co trainer Todd Harvey ''The horse looks to be a very nice horse in the making and will only get better with further maturity and racing experience'' Todd also reported.

Tradesman scored a commanding win in the 1100m Maiden for three year olds and upwards. Jockey Troy Turner rode a very positive race, he bounced him out of the barrier and took him straight up to sit outside the leader. Into the straight Troy balanced the big fellow up and asked for the effort and Tradesman responded beautifully winning eased down by one length. ''The horse was very green in the run home and will come on greatly from todays experience'' said jockey Troy Turner.

It was a terrific day at Northam with some of Tradesman's owners making the trip to Northam to cheer him home. They were catered for in an Owners Only function provided by Racing And Wagering Western Australia and all had a fantastic day. First time owners Paul and Teena Thompson said "They never knew how exciting the races were after being owners in a winning horse!''