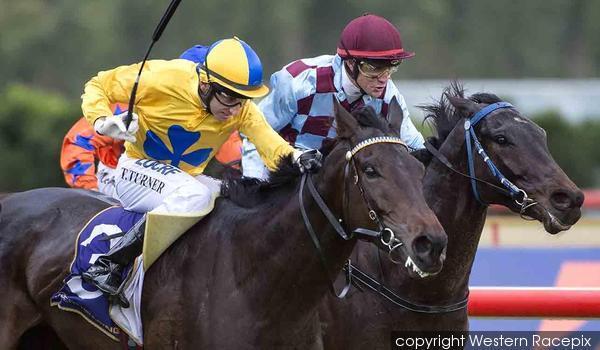 Rising star Tradesman completed his three-year-old season with a fighting victory in the $60,000 Dayana Plate (2000m) at Belmont today.

A dominant winner of the $100,000 WAROA-Belmont Guineas (LR-1600m) last Saturday week, Tradesman displayed a depth of character to fight off his rivals one-by-one in the straight, before surviving a late charge from Dark Musket to hold on and score by a short half-head.

The son of Trade Fair's regular rider Troy Turner produced a 10 out of 10 display in the Belmont Guineas, and pulled out another brilliant, tactical ride to secure victory in today's Dayana Plate (watch replay here).

Trained at Ascot by father and son combination Robert and Todd Harvey, Tradesman has been one of the finds of the Belmont season and has to be considered among the top 10 three-year-olds to have raced in WA this season, in what has certainly been a star-studded crop.

Todd Harvey reported post-race that Tradesman will now head to the spelling paddock with a view to return to racing in November.

"We are going to have to rush him back into training if we want to give him a shot at the Railway Stakes (November 21)," Harvey said.

"But he has only had the six starts and is probably not quite seasoned enough to be competing at that level in a few months time.

"We will more than likely try to pick off some ratings races in November and December, and let him go through his grades and hopefully bank some more prizemoney for connections."

The striking Tradesman certainly stands out in the crowd, but his co-trainer believes there is still plenty of scope for improvement.

"He is a lovely horse but is still learning his trade, so to speak," Todd Harvey said.

"He still has some physical and mental maturing to do and providing he stays sound, I have no doubt his best results are ahead of him. He's pretty good."