WHO'S TO BLAME POINTS THE FINGER!!! 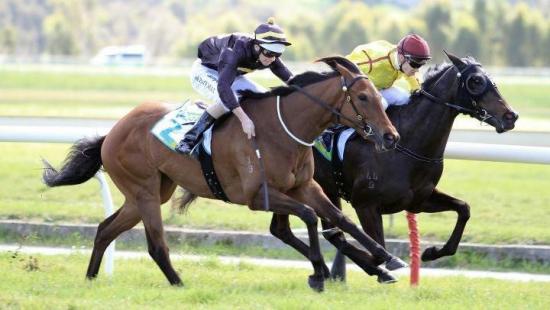 Who’s To Blame has turned in a terrific effort to post her maiden metropolitan victory in the Westspeed 3YO Handicap (1600m) at Belmont.

The three-year-old filly has raced in terrific heart throughout her career but she broke through for a comfortable win in a Northam maiden two starts before getting a further reward for her honesty with her Belmont success.

The small field that assembled for the $45,000 event ensured the six runners would engage in a tactical battle throughout the race. Apprentice Mitchell Pateman gave Who’s To Blame time to balance and was unconcerned when his mount ended up last approaching the 600 metres.

Pateman simply shouldered into the clear rounding the home turn, giving Who’s To Blame the chance to work into the race.

The daughter of Bletchley Park engaged in a battle with Futurism in the straight before emerging victorious by three-quarters of a length at her first attempt at a 1600-metre race.

“We were really pleased, she has always indicated to us that she would get a bit of distance,” Todd Harvey . “She’s a funny filly, she doesn’t want to do a lot early in her races but she’s got a nice turn of foot and it wasa great result.

“She dug deep and she managed to overhaul Futurism. It was a good tussle between the two horses. It was a good ride from Mitchell and he rode her to instructions, He got her off the rail at the right time and everything worked out well.

“We’ll give her another couple of runs and she really indicates to us that she is going to get a trip so there’s something like the Oaks races in the autumn for her.”

Who’s To Blame’s win was her second from six starts and the $29,250 first prize took her stakes tally to more than $65,000. Congratulations to her owner Vern Orr.