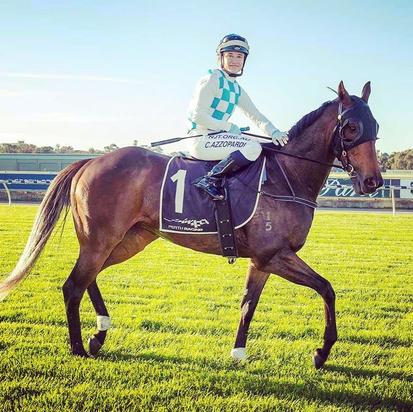 Team Harvey, Chloe Azzopardi and Proconsent teamed up for a stunning win in yesterday's  SKYRACING.TV PROVINCIAL CHAMPIONSHIP SERIES FINAL $100K. It was also a day to remember for Proconsent's owner/breeders Neil & Annie Irvine of Rapid Equine with a two state double!

After a comfortable win in his championship heat at Pinjarra the series final was the logical next move for Team Harvey, although Proconsent was untried at the 1400m distance of the race. After receiving top weight of 61.5kgs Chloe Azzopardi was engaged to reduce his weight to 60kgs. We were thrilled to secure Chole for the mount following a season to remember for the young jockey, she had ridden five $100k feature race wins in the 2019-20 season before yesterday's race and we were very confident our gelding was in good hands. Azzopardi rode him exactly to instruction, settling him early and getting cover. From the 600m mark she started to make her move and stoke the rangy galloper up, he tracked up beautifully into the home straight and once balanced Chole pushed the button and away they went to score a comfortable win in the feature race of the day!

Yesterday's result was especially pleasing for Rapid Equine principals Neil and Annie Irvine and their team at Balmoral Park, Proconsent was bred by the Irvine's and is by their stallion Proart a horse they also raced. In a double celebration they also tasted success on the east coast at Flemington!

Proconsent is building a solid record to date with five wins and a second placing from just nine starts, he went into yesterday's feature as an outsider but reigned supreme and he certainly looks a horse who will continue to progress further.

Stablemate Gifted Warrior also started in the series final yesterday, the War Chant gelding ran a huge race to run a close fourth. After drawing poorly he was afforded no luck in running being posted wide the entire race, he found the line bravely to finish just 1.9 lengths from the prize. Gifted Warrior is coming into some form after an extended time away from the track, with a good barrier draw and some luck in running he will be saluting shortly for owner Vern Orr.