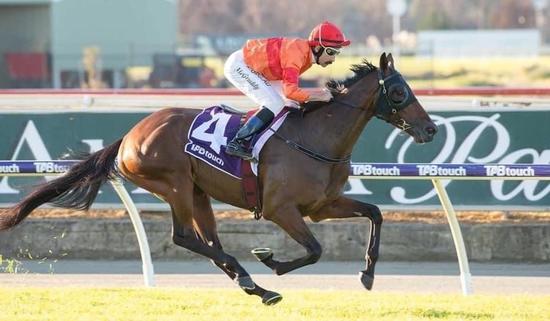 It was the gelding's first victory for Harvey Racing since joining the team earlier this year, he had his hoof on the till with second, third and fourth placings at his last three appearances. On paper he may have looked a little disappointing at his last start but it was his first go at the mile distance and he was ridden a little too positively by McGruddy, he also found himself on the worst part of the track that day at Pinjarra.

Back to Belmont Park and the experience and fitness of a run over the distance AVALON BAY was ready for a big showing. From a low draw McGruddy had him perfectly positioned mid field travelling sweetly, on turning he angled him out for clear running and he let down beautifully to win running away by 2.75 lengths. I was a lovely steer from the man with the mo! and he reported post race "'He felt super today and really won well, he should appreciate a little more distance going forward". The win brought up a double celebration as co trainer Robert Harvey celebered his 63rd birthday the day before.

Congratulations to his winning owner/breeders Kieran "Bluey'' Glynn, Lex Piper, Bruce Sampey and Arthur Barrett, with yesterday's win sure to give the horse a good boost of confidence hopefully he can go on with the job and notch up a few more wins! AVALON BAY will step up to the 2000m distance for his next assignment