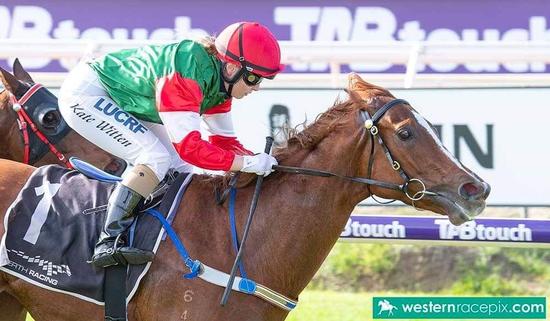 Amelie Argot returned to racing in brilliant fashion at Ascot on Wednesday the 17th in the Iron Jack Handicap 1000m. Returning from a fairly long lay off the beautifully bred daughter of Not A Single Doubt never looked in doubt when cruising to a length victory in quick time. She was well handled by claiming apprentice Kate Witten who reduced her weight to 58kgs after being allocated top weight of 60kgs. She sat outside of the pace maker Triple Event and was well rated by Witten throughout, on straightening Kate gave her full bore and she ran away to an effortless win her fourth in just seven starts.

Amelie Argot has been lightly raced due to immaturity but now looks set to make the grade to Saturday metropolitan racing. Bred by Amelia Park principle Peter Walsh who is also a part owner, she was purchased by Harvey Racing at the 2016 Perth Magic Millions Sale and syndicated to stable clients Peter and Stephen Capelli, Wes and Fran Graham, Neil Hinchie and of coarse loyal stable supporters Peter and Annie Walsh. Congratulations to her winning owners they have been very patient with this mare and they now look set to reap the rewards.