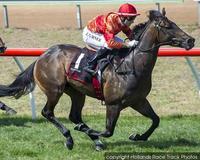 Marchand resumes and Wayside continues his path to the Geraldton Cup at Ascot on Saturday.

Marchand has been away from the races since August and hasn’t had a trial for his first-up assignment in a 66+ rated event over 1000m.

It is race four on the program and scheduled for 2.49pm.

“He won’t be far away because that is the sort of horse he is,” co-trainer Todd Harvey said.

“He usually has a trial and might be a little soft first-up this time, but he is super genuine.”

Aaron Mitchell will take the ride on the son of Oratorio who boasts a fresh record of two wins and a third from four attempts.

The stable will also saddle up Wayside in race five, the Pro Rata Club Membership Handicap over 1600m at 3.25pm.

Mitchell will also ride the stayer who is second off after an encouraging first-up effort.

Todd regarded Wayside the better chance of the two runners on Saturday.

“He is working really well, I would be more confident over a touch shorter because he may be chasing a little bit second up,” he said.

“This run will really top him off.”

Wayside will have two runs over 1800m following Saturday’s run before the 2100m of the Geraldton on April 2.