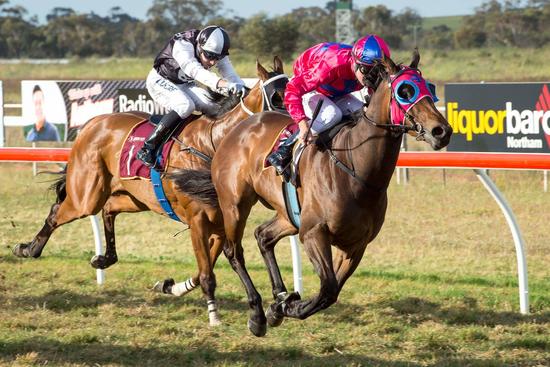 Honest Pins mare Hopetoun picked up her biggest win to date in the $50000 Ladies Day Cup at Northam Race Club on Sunday the 9th of October.

Having her 3rd up run this campaign Hopetoun went in to the feature race nearing her peak fitness and trainers Rob and Todd Harvey had a degree of confidence about her chances! After two solid runs back from a spell and having no luck with wide barrier draws, the mare looked very well placed after drawing perfectly in barrier 2. Jockey Jason Brown also was quietly confident with his mount after improved track work in the fortnight since her last run. Jason positioned her perfectly in the one out one back position and saved her right till the last minute to time her finishing burst to perfection to take out the prize!

Hopetoun has been a good acquisition to the stable since Todd purchased her from the Karaka Sales in New Zealand. Her record now stands at 14 starts 3 wins 2 seconds, 2 thirds and 3 fourths for $62950 in prize money. The Pins stock do seem to come better with age and Hopetoun is no exception and we are positive there are some more wins in store for this tough mare!

Congratulations to winning owners David and Hyden Borger, Bill Colgan, Ross and Sue Munns, Marie Almond and Barrie Dearle. David Borger was on coarse to see the victory and celebrate the win!