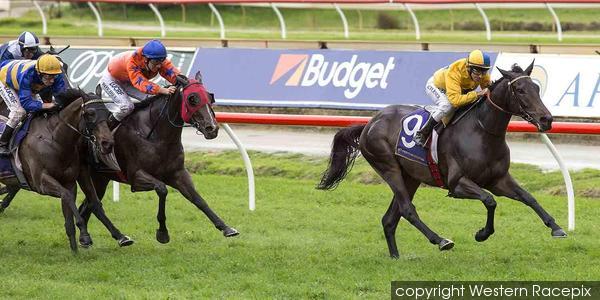 Stable star Tradesman made it three wins from three stars at the 1600m distance on Saturday at Belmont Park.

Tradesman is really showing a liking to the bigger Belmont track, and now has the imposing record of four wins from five starts at the track. It was the Trade Fair geldings first win in his second campaign following placings at 1400m and 1500m at Ascot when racing first and second up respectively.

Tradesman was ridden to perfection by 2kg claiming apprentice Aaron Mitchell, the horse began positively and sat out side the pacemaker Slick Talker. After cornering awkwardly the big fellow was balanced up by Aaron and he wore down his rivals to score comfortably by half a length. Credit must be given to regular rider Troy Turner who dose all of the work on Tradesman, he was replaced by Aaron when weights were raised at acceptances following the scratching of the higher rated horses.

Part owner Gary Hardie was on course to see his prized galloper race for the first time and was most excited to see him win! Gary also got the oppertunity to lead him in along with fellow owner Marie Almond.

Tradesman now heads to a 2000m race at Belmont on the 21st and the extra distance looks suitable for his next assignment.