Lakers Looking For Two On The Bounce 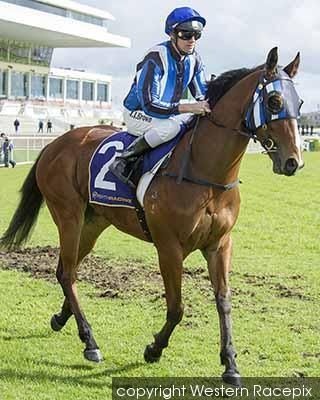 The Danehill Express juvenile was luckless when finishing fifth at his Northam debut on June 26 but made amends when enjoying a trouble-free run in the www.givemefiveforkids.com.au Maiden (1100m) last Thursday, holding on to defeat $3.80 favourite Wobbegong by a long neck.

"We have just given him a bit of extra time to mature and it has done him the world of good.

"Clearly, things didn't go to plan first-up when he was never out of trouble, but he was able to bounce back and get the money last Thursday.

"As a stable we really needed to get a win on the board and it was a great result, especially for the owners. They've been great supporters of Harvey Racing for a long time."

Let's Go Lakers will step up in distance and is likely to take on superior opposition at next Wednesday's Belmont meeting, but Harvey is confident the well-related youngster can measure up.

"His mother (Just Marika) was stakes placed and he has city winners all through his family including Doyoudare," Harvey said.

"He obviously has a bit of ability with plenty of scope for improvement as well, which is encouraging moving forward into his three-year-old season.

"And we just need a decent barrier and he will be highly competitive at Belmont next Wednesday."

"We were probably a little unlucky not to walk away with a double, as Overcast got a bit too far out of his ground and was a fast-finishing fourth," Harvey said.

"Both Overcast and Saverio should go close to winning maidens soon and both will be nominated for next Thursday's Northam meeting."