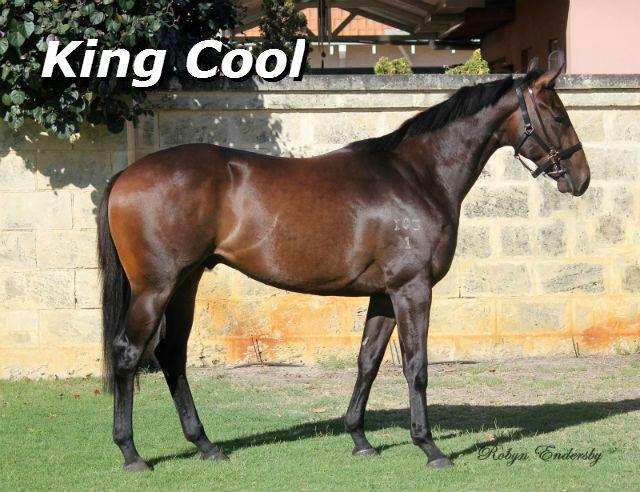 The son of Due Sasso looked very sharp when defeating subsequent Belmont winner Myboypaul in a 1000-metre trial at Belmont on April 14, but he suffered a minor hamstring injury soon after and was forced to wait until May 22 before making his race debut at Pinjarra.

King Cool was well fancied ($4.40) down the straight 1000-metre circuit on that occasion, but the 38 days between his last trial and raceday ‘softened him up’, and he had to settle for a competitive second placing behind the highly-regarded Kim Excel.

“He (King Cool) was absolutely flying prior to the hamstring injury,” Harvey Racing’s Todd Harvey said.

“But we had to back off him for a couple of weeks so he could recover, and that obviously left him a little bit vulnerable first-up at Pinjarra.

“He hit a flat spot at the 350 metre-mark and looked as though he was going to finish fifth, but he really knuckled down late, and we were impressed with the way he dug deep to run Kim Excel to a length.

“That was a pretty competitive two-year-old maiden and we wouldn’t be surprised if the first four home go on to win in town.”

Harvey is thrilled with King Cool’s efforts on the training track since his Pinjarra debut and believes racegoers will see a much sharper performance from the muscled-up youngster.

“He has really come on since that run and his work has been spot on,” he said.

“We did nominate him for the two-year-old race at Belmont yesterday, but decided to scratch in preference to Northam. In hindsight, it may have been better to stay in town, as that race only ended up with four runners, but that’s the way it goes sometimes.

“But we’re in a winnable race tomorrow, with a perfect barrier draw and we think he really should just get the job done.”

The Lex and Shirley Piper-owned King Cool will be ridden by Todd Harvey’s jockey-brother Clint tomorrow, who was also aboard at Pinjarra last Thursday week.

“Clint has been riding him every morning at trackwork and he can’t fault him,” Todd Harvey said.

“The main dangers appear to be Fire Born, Rule To Wyn and Shinboner Buster, but our bloke should really get the run of the race and be too strong for them at the finish.”