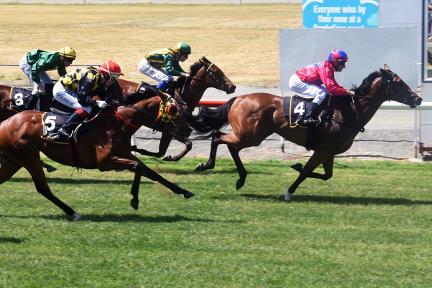 Indefatigable broke his maiden on debut at Narrogin on the 27th of November, and the strapping son of Vital Equine never looked like getting beaten!

Indefatigable has been an improving type, his track work at home was improving with every work out and after two trial placings the big gelding really switched on and trainers Rob and Todd Harvey went to the races with a degree of confidence! He was sent out at the very juicy odds of $17 and his syndicate of owners didn't miss out! landing some very good bets!

Following his trial placings jockey Troy Turner advised the Harvey training duo to enter the horse in a shorter race rather than the 1300m race preferred by Rob and Todd. This really showed Troy's experience and horsemanship as he thought the horse needed a more genuine speed in his race which he got in the 1100m race and dually saluted! After a good start from the barrier Troy positioned the horse perfectly in fourth spot, the horse traveled strongly with the pace on and in the home straight he balanced him up and drove him home to a very soft win.

Indefatigable looks set for a very bright future and will only improve as he learns more about racing. Brought at the 2013 Magic Millions Perth sale for $38,500 by Rob and Todd the horse was then syndicated to a fantastic group of owners and they look set to have a heap of fun with the horse!

Congratulation to winning owners Syd and Jude Bell who tasted their first victory and racehorse owners! Syd and Jude have been long time supporters of Harvey Racing without much luck so to see them finally acquire a winning horse is great! And very deserving after years of trying! Congratulations to the other winning owners Ian O'connor, Tom Martin, David Parker, Alan Kerr,Troy Morrissey, James Elliot,Greg Elliot, Byron Messer, Marie Almond, Barrie Dearle and Derek and Sandi Dennis.