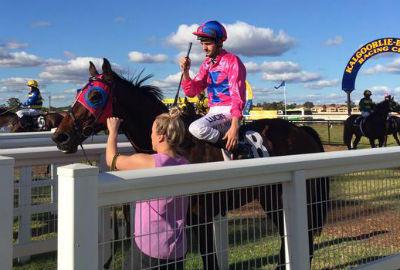 Father and son training partners Robert and Todd Harvey continued their stable's outstanding recent form with two winners from as many starters at Kalgoorlie today.

Fresh from claiming the Dayana Plate with exciting three-year-old Tradesman at Belmont yesterday, Harvey Racing headed to the Goldfields with two winning chances and so it proved, with King Cool and Silver Minx both saluting the judge.

Honest three-year-old King Cool was sent out a $3 favourite first-up in the $12,500 Mick Pavlinovich Maiden (1100m) and didn't let his supporters down, scoring an overdue maiden win courtesy of a well-timed ride from up-and-coming apprentice Jordan Turner.

It was then left to stable stalwart Silver Minx to complete the training double in the $16,000 Boulder Parts & Towing Handicap (1600m), and the seven-year-old didn't disappoint, leading all the way for jockey Ryan Hill to score a soft 1-1/2 length win.

It was the sixth win from 43 starts for the well-travelled Silver Minx, who has now recorded victories at Albany, Kalgoorlie, Moora, Mount Barker, Narrogin and Norseman.

Robert and Todd Harvey have enjoyed a tremendous resurgence in the latter stages of season 2014/15 and have now saddled up five winners from their last six starters.