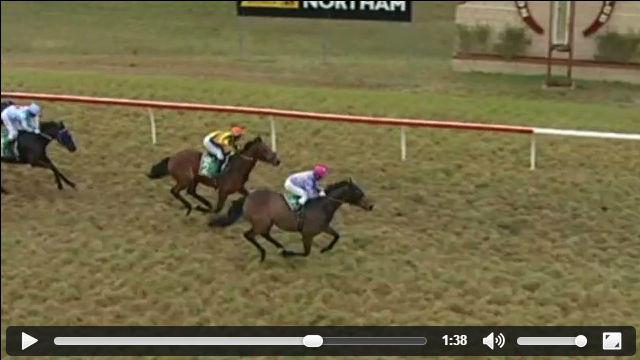 Lightly raced five-year-old Blustery made a blistering return to racing at Northam yesterday when coming from ninth on the turn to record an impressive win in the Lifeline 13 11 14 Handicap (Race 7-1600m).

Having her first start since March 29, Blustery was sent out a $20 chance first-up over the 1600 metres and was ridden sweetly by the experience Troy Turner, who was able to cross to the rail in the early stages after jumping from barrier 7. Blustery improved between runners on the turn to be within striking distance at the top of the straight, with Turner producing the daughter of Danehill Express with a well-timed run to overhaul the well-fancied Young John ($4.60) and score by a 3/4-length (click here to watch replay).

The slow maturing Blustery displayed staying potential when last in work, including a second placing over 2200 metres at Ascot on March 18 this year, and appears to have taken another step forward this time in work.

A well-related mare, Blustery is a half-sister to the 2011 Perth Cup winner Guest Wing, and her dam Lacienne (by Metal Storm) is a full relation to 2000 WA Guineas winner Kalatiara, multiple stakes winning racemare Kentiara and 2002 VRC Oaks placegetter Antique.