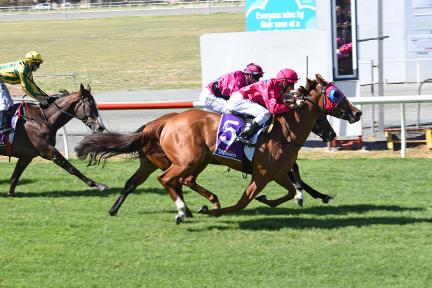 Australia Day was a double celebration for the Harvey Racing Team and connections with speedy customers Jetoomy and Gondo Rose both saluting the judge at Narrogin.

First to take line honors was Reset gelding Jetoomy who broke through for his maiden win at his 4th start. Jetoomy has always shown an abundance of speed and was placed twice from 3 starts prior to winning at his 4th. Jetoomy hails from a very good family and was bred by his winning owners Livio and Renato Divitini. The Divitini's have had great success from their mare Bloomy, she has produced the smart performers Doyoudare 8 wins, Just Marika 2 wins, Miss Tahitian 7 wins, Rocky's Brother 4 wins and Black Carat 3 wins. So on family tradition and with some further maturity Jetoomy looks to have a very promising career in store. Congratulations to Livio, Renato and their good friend Warren Stirrat on Jetoomy's win.

Fast mare Gondo Rose won her second race from three stars this campaign with another very easy win, showing her liking for the Narrogin track! Gondo Rose has returned better than ever and is really pleasing owners Barry, Jan, Greg and Dee Mc Rostie. The Mc Rostie's also bred Gondo Rose and in fact celebrated 10 years prior to the day with Beaugondo winning at Ascot on Australia Day in 2006! Beaugondo was a very promising racehorse who's career was cut short due to injury and Barry decided to retain the entire for breeding. Gondo Rose is his first winning daughter! Congratulations to Barry, Jan, Greg and Dee on her win!

Big thanks to our stable jockey Troy Turner who rode both horses to perfection and capped off what was a very memorable Australia Day for Team Harvey!